The New Translation and a Culture of Vocations

My latest for the Catholic Telegraph, which is featuring their annual Vocation Issue this month:

As the implementation of the new translation of the Roman Missal neared, I was often asked what impact I thought it would have on vocations to the priesthood and religious life. While it seemed that some felt the new, more elevated translation might drive some away from pursuing the priesthood, it is my thought that it will actually do the opposite and draw more young men and women to recognize the possibility of a priestly or religious vocation.


There are several reasons for this possibility. First, over the last two years, we have had such a focus on the importance and centrality of the Eucharistic celebration in our identity as Catholics. Hopefully, this has led all of us to a deeper and more profound love for Christ and His Church. This love is what ultimately creates those initial stirrings of a vocation and provides the strength to overcome those sometimes tedious moments during formation when it all seems too much.

Also, a priest friend recently relayed an encounter he had with a parishioner, who admitted that the new translation was forcing her to listen with a more attentive ear. But she also admitted that this was not a bad thing! Yes, the language is ‘higher,’ more poetic and the syntax can be difficult at times; but these are the exact attributes which engage the mind, the heart, the imagination, the desire to learn and grow deeper into what is being celebrated. As we have now entered into these changes, we (priest and laity alike) can no longer just skate through Mass easily, we have to be much more intentional about the words we are praying. Again, the words will shape the heart which will ultimately, hopefully, engage the heart in the stirring of that desire to know Christ, personally, profoundly.

On a further note, the language of the new translation is one of supplication and pleading; rather than one of the sometime presumptuous found in the now outdated translation. I think this is mostly a result of the change from active to passive voice in the newer translation; but in reading the prayers, in meditating over them, as a priest, I get the sense that I do this with a certain amount of fear and trembling before the God of the Universe. It strikes me that the recognition of a vocation often requires a similar approach. One does not presume to take on the priesthood for oneself, but has been called forth to this life by God Himself; mystery surrounds why I was invited to this and not my brother; for instance. (To be clear, I am not denigrating the outgoing translation which nourished my own priestly vocation, just trying to understand the differences between the two.)

It is this encounter with the Living God is the source of any true vocation: priesthood, consecrated, single or married life. Archbishop Fulton J. Sheen was quoted as saying that men, in discerning the priesthood, will not give their life to a question mark, but they are willing to give their lives to a mystery.

As we grow more accustomed to this new translation, as we are formed by the words and actions of the Sacred Liturgy, as we meditate and pray over the mysteries being celebrated; let us all experience that awe inspiring mystery of the One True God, that He might lead us all through our pilgrimage of life closer to Himself.

The reaction when I felt a call to the seminary and priesthood was mostly positive; but one reaction from an Aunt of mine really caught me off guard: 'What, Tom's son?'

In his younger years, dad was a bit of a party animal.  I would repeat some of his stories here, but it is a family blog, so well, you know.  (Not that anything was illegal, rather more impish; so yes, I come by it honestly.)

I thought of that reaction at Mass this morning as I read the Genealogy of Jesus as found in the Gospel According to St. Matthew:


Not exactly the list of characters, if you were going through the Bible, whom you would choose as ancestors of the Son of God.  Rahab was a harlot and prostitute.  The kings were ruthless murders, cutthroats and thieves; among others!


Yet, these are the human ancestors of Jesus.  This is his family heritage.  I hope it gives some solace to those families who have a less than perfect record, that even 'Tom's son' can make it to be a decent priest.  God works in mysterious ways, as we stand one week outside of Christmas; let Him work in your family, too.
Posted by Father Schnippel at 12/17/2011 11:25:00 AM 2 comments:

The Vocation Office is glad to announce a new effort to help in the financial support of Vocations to the Priesthood for the Archdiocese of Cincinnati: Run for the Call!

The idea was developed after 'nun runs,' but with a bit of a twist: Priests, seminarians and those interested in supporting seminarians running the Flying Pig Marathon to gather donations and support for our seminarians in need of financial assistance.   (and before you ask, I'm giving moral support from the sidelines!)

More details will be forth coming in the next few months until the Pig, but if you are interested, see the site here.
Posted by Father Schnippel at 12/13/2011 02:39:00 PM No comments: 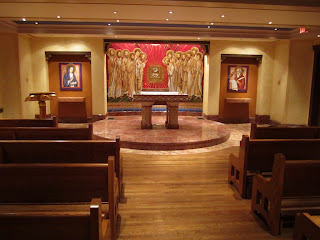 This past Thursday, on the Patronal Feast of Mount St. Mary's Seminary, of the West, Archbishop Schnurr reconsecrated the Immaculate Conception Chapel for the private and devotional use of the seminarians.  The sanctuary is pictured above, for more pictures, see here.
Posted by Father Schnippel at 12/10/2011 03:38:00 PM 2 comments: